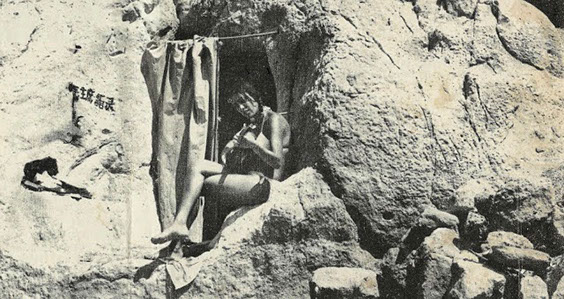 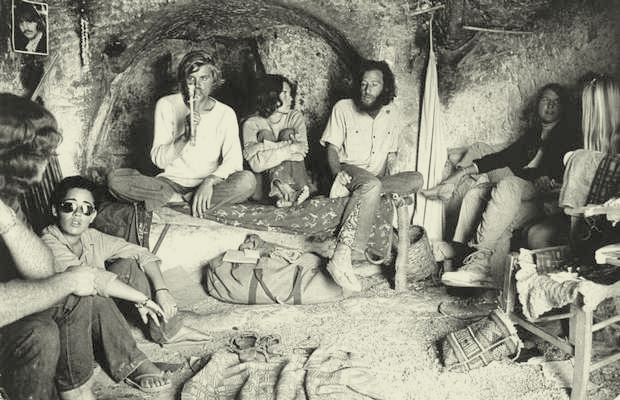 I copied and translated this article from the online Cretan Magazine.

She did not want to use her name, which we clearly respect, while grateful for
the beautiful images she gave us, showing us a different look of Matala ... as a destination for different people.

The 83-year-old woman came to Matala with her education husband, who originated from neighboring Pitsidia. Together they built a small house in 1957 to spend holidays with their two children at the seaside.

At that time Matala was a fishing village with ten houses, with the sea at least three times as far away from the mainland as what we see today.

The first flowerchildren appeared in the area in 1958. According to her, they were decent, well-off people with education and culture who wanted to live in nature, and they were adorned with flowers and lived in the caves.

These first Matala visitors, she notes, were not hippies but flowerchildren. Their basic feature was that almost all of them had a lot of money they spent generously to meet their needs.

She remembers that there have been times when the only bank operating in Mires was unable to cope with the demand for currency by these people.

Typical was the case of an Italian university professor who she met during the first years of her stay in Matala. The Italian, wearing a golden jewel, a necklace with large shells, and holding a walking stick passed by her house and while initially just greeting each other, later they became friends.

Because of his appearance, one day she said to him: "You're like a fuckin devil."
The Italian did not know Greek, but realized that his 24-year-old wife was not amused, and so the next few times, when he came by her house, he greeted her with a "Good afternoon."

In fact, in one of the caves of Matala, the word "Diavolos", which no one could explain, was written, only the Italian and Greek good friends, who gave him the nickname.

With the well-known Cretan hospitality that distinguished her, she often offered coffee, grapes and what else she had in her house without knowing that he was a professor at a university. The revelation of his identity was made by a young Mierian, who was studying in Italy.

The first flowerchildren that arrived at Matala were distinguished for their very good attitude towards the locals and the excellent relationships they had with them. The men walked around fully clothed and the women in their dresses and never naked. Indeed, in the sea the girls wore a full-length swimsuit.

Daytime they swam near Matala beach and the neighboring Red Beach, while in the evenings they made camp fires and sat around singing and playing music, inviting their local residents.

Several times they surrendered to the rhythms of the Cretan lyre, since a priest from Galia went to Matala and with his lyre he entertained runaway locals and strangers. The flowerchildren engaded in Cretan dance, without even knowing the steps, making it up with their enthusiasm.

Their good financial situation enabled them to eat daily at the Matala café’s and spend money in the bakery and in the shops of Mires. It is remarkable that they always took care when the locals offered something to repay it to please them.

Among the early arrivals of flower children in the area was also a British lord who stayed for a while in the caves before moving for health reasons to an old small Matala house.

Unforgettable will be a brilliant teenager who made the 1950’s holidays in Matala as a flowerchild and asked her to teach him Greek. He even loved the language so much that he returned to England and went on to a Greek school to become a professor at Cambridge’s famous university.

This young man a few years ago visited her again in Matala, accompanied by his two sons this time, reminding him of his nostalgia that she was furious when he was making mistakes in the words she taught him.

Matala was also visited by the well-known musician Ross Daley. A young man then, Ross had seen a donkey in the area and asked if he could get it. So he bought two clay pitchers, stuffed them daily with sweet water, loaded them on the donkey, and went to Red Beach without ever riding the animal because he was sorry.

The years, after 1958, the flowerchildren increased numerically without losing their quality and good behavior. But the countdown to change the image of Matala began in 1967 when, at the order of Metropolitan Gortyn, the Junta expelled them out of the area.

Most of the old batch of flowerchildren have since stopped to visit Matala in the summer months, and so gradually the place was filled with hippies who lived completely liberated.