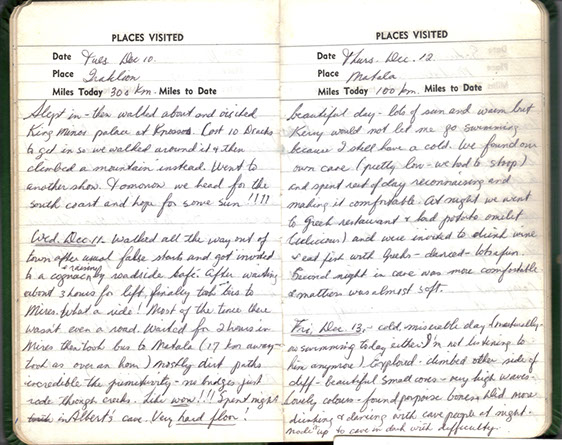 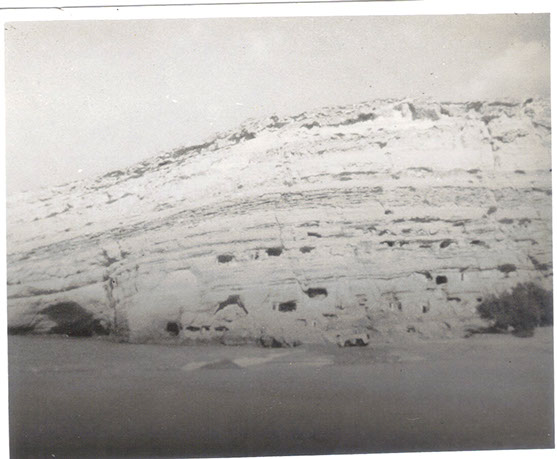 In 1968 I hitchhiked through Europe with a Canadian classmate, Kerry Hodge, who had come over for that purpose. I had already spent over a year at art college in the Netherlands, where I was born, and Germany, where I was working at that time for a silk screening company. This is an excerpt out of the dairy I kept. After my stay at Matala I travelled on to the Middle and Far East, Kerry went back to Canada..

We walked out of town (Iraklion) on our way to Matala and got invited to a cognac and raisins by a roadside cafe. After waiting for about 3 hours for a lift, we finally took the bus to Mires. What a ride! Most of the time there wasn’t even a road. We waited for 2 hours in Mires, then took the bus to Matala (17 kilometers away which took us over an hour). Mostly dirt paths, incredibly primitive - no bridges so we just drove through creeks. Like WOW! Spent the night in Albert’s cave. Very hard floor!

Beautiful day, lots of sun and warm but Kerry would not let me go swimming because I still had a cold. We found our own cave ( top story, second from right, pretty low ceiling, we had to stoop over) and spent the afternoon looking around and finding stuff to make it comfortable. At night we went to a Greek restaurant and had a potato omelette (delicious!) and were invited to drink wine and eat fish with the Greeks, danced and had lots of fun. Second night in cave was more comfortable and the straw and grass mattress was almost soft.

Cold, miserable day, explored, climbed the other side of the cliff: beautiful small coves, very high waves. Lovely colours, found porpoise bones. Did more drinking and dancing with cave people at night. Made it up to the cave with difficulty.

Sun still not shining all too bright. Kerry toasted some of our stale bread, tasted quite nice (could use a bit of butter though), bummed around all day and then went to the café and danced and drank some more. Janni had a birthday party with free wine and a piece of cake. Then we sat around the fire and played guitar and listened to records. One record got stuck and repeated the same the beat over and over again and everybody beat with spoons on glasses and plates, clapped to time of the beat. Noisy but fun. Also learned a Greek dance. Finding the cave and climbing up the cliff in the dark is a bit difficult when you can’t walk straight.

Went swimming, then I started to work for Evangelis for free meals. Lotsafun! Sat around fire and drank some more wine.

Kerry woke up with a sore stomach, not eating well enough, I guess. Later on it started to rain, we didn’t swim. At night we met two Canadians from British Columbia, Jackie and Frank. They wanted to spend a night in our cave so we spent a night in their hotel room.

Went swimming again today. Saw some Greek tourists who came to see the hippies living in the caves. Quite nice, most of the hippies, but they also used a lot of pot and hash, which surprised me [because I was as yet not familiar with this stuff]. There was a Dutch fellow from Enschede here herding sheep for a living the past three years. Quite a beautiful bunch of people to look at (beards, bushy hair etc), can see why it is a tourist attraction. Jackie and Frank missed the bus and spent the night in the cave with us.

They are planning to have quite a Christmas party here and roast a couple of sheep, but we’ll be in Athens for Christmas dinner with the US navy (met two sailors in Athens before we left for Matala). Went swimming again, beautiful day. I drew a portrait of Evangelis who is quite cute and nice. Went to bed early because we were making an early start the next day.

Left for Iraklion and the rest of the world.

Because of the impression Matala in particular and Crete as a whole made on me that week in 1968, my husband and I have been visiting Crete for a short holiday every year for about 25 years now. The first years we used Matala as base and travelled around from there, the last years we stayed in Plakias and visited Matala every so often.
This vacation we discovered Arn Strohmeyer’s book ‘The Myth of Matala’ which is how I came to know about www.matala.nl and added my memoirs to the site.

Matala is no longer what it was, but the memory sticks like glue. And what interests me most is how the lives of other ‘cave dwellers’ developed after Matala. Did others also travel on to the Middle and Far East? How did this experience influence the rest of your lives? Is it an idea to collect these stories for another book?

Please get in touch with me if you feel like reminiscing! www.ellenheutink.nl